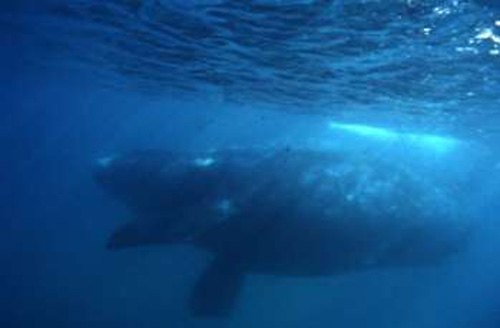 Michael McFadyen, a National Parks and Wildlife Service (NPWS) employee was lucky enough to experience a southern right whale up close in June 1993.

The female southern right whale Michael encountered had given birth to a calf only four nights earlier, a few kilometres north of Mona Vale Beach in northern Sydney. After the birth, the whales had roamed the short distance between Manly and Collaroy, as the infant needed to gain strength and experience before venturing out to the open sea. Although tiny compared to the mother, the calf was already about 5 metres long.

Michael and his friend Mike Cufer had obtained licences from NPWS to approach whales for photographic purposes, and when Michael located the mother and calf off Fairy Bower Beach near Manly, both men entered the water and swam towards the whales.

Michael and his partner slowly made their way from Fairy Bower towards Manly Beach, trying not to unsettle the whales or upset the growing crowd watching from the beaches and headlands. At the same time the mother and child became more mobile, ranging up and down the beach about 300 metres, but after an hour they started swimming back towards the men.

“They seemed to be homing in on Mike just in front of me,” Michael said. “They got closer and closer.”

“I started looking under the water and then, there was the mother approaching me. I took a deep breath and dived down about 4 metres and started taking photographs, trying to get all of the massive mother into the photograph. The scene in front of me seemed to be almost in slow motion, the whale seemed to be taking ages to pass. I was only a few metres away and I was certain she was watching.

The whole encounter had probably only lasted 30 seconds or so, but to the lucky men, it had seemed like minutes.

Mike said that when he first saw the whales he was so excited that he thought that his heart would jump out of his wetsuit. He has dived with creatures like great whites, tiger sharks and even saltwater crocodiles, yet he says that this encounter topped the adrenalin rush.