Most whales migrate to eat and breed. For example, baleen whales feed mostly on krill, which is abundant in very cold waters. However, these cold waters are not a suitable environment in which to give birth – newborn calves are born without a protective blubber layer under their skin and would quickly freeze to death.

So whales meet their need for food and suitable calving areas by travelling long distances from cold feeding areas, to warm, shallower waters for calving and mating.

Most large whales migrate, but migratory patterns vary from species to species and also vary within and between populations. For example, in right whale populations, migration seems to be undertaken mostly by pregnant females heading to warm waters to give birth, while both male and female humpback and gray whales seem to undertake seasonal migrations.

At least 45 species of whales, dolphins and porpoises can be found in Australian waters. Humpbacks and southern right whales are the most commonly seen whales along Australia’s coastline, but some other cetaceans that you may see include:

Humpbacks have a wide geographic range and are found in all the world’s oceans. During summer months, populations in the southern hemisphere spend their time in Antarctica feeding. In late autumn they begin an annual migratory route to their winter breeding and calving grounds in the warmer tropical waters of the Pacific. They return south in spring.
Humpback whales migrate around 5000km on average, one of the longest migratory journeys of any mammal on Earth.

Southern right whales are similar to humpbacks in that they feed in Antarctica in the summer and then migrate north to Australia to breed and give birth (especially in southern corners of Australia, around the Great Australian Bight).
On the east coast, southern right whales tend to migrate between Cape Byron and Antarctica, but have been seen as far north as Hervey Bay, Queensland. 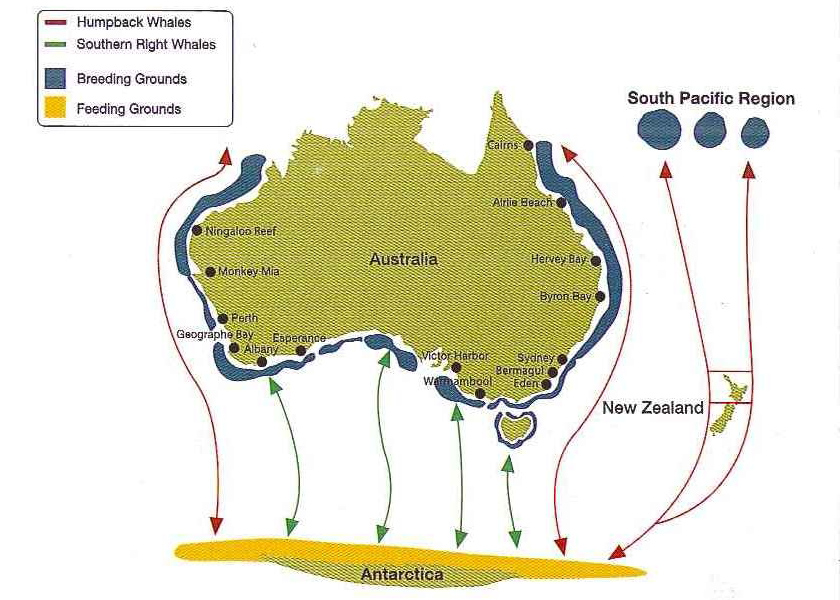